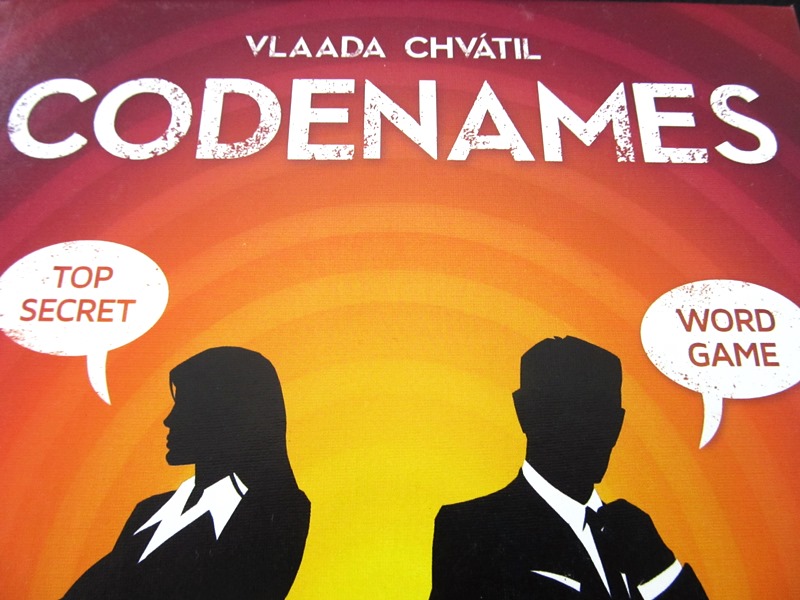 Vlaada Chvatil has been known to make some great games. Often they have complex and highly thematic rules, and sometimes a second book which teaches you how to teach the rules! Codenames is not one of those games. It’s actually deceptively simple.

Released in 2015 by Czech Games, Codenames is a light party game. Players split into teams and have to determine which codenames on the table belong to their team. They need to rely on their Spy Master who will give them clues as to which cards belong to them.

What’s in the box

Specs on the box:

In the box we have cards. Lots and lots of cards. Most of them have code words on them, which the team needs to guess. There are a few square key cards for the Spymasters to use; these help them to identify which code words belong to them. These cards have a little plastic stand that they are slotted into so that it can only be viewed by the Spy Masters.

There are also 16 agent cards which are separated into red and blue, for the 2 teams. Then 7 beige innocent bystander cards and 1 black assassin card. There is 1 double agent card that is both red and blue, this is the double agent that will go to the first player. Additionally there is a timer, to be used if someone is taking very long. It is up to the players to decide if they wish to use it or not. Lastly, there is the small rule book.

The game takes place at a convention or party or some event where you are given name badges. All of the code name cards look like name badges. Then you need to identify your fellow spies by their names as you have never met them before.

That’s it, I think. I don’t actually care what the theme is and I doubt most people will even remember. It’s just fun to setup and play and then play again.

Setup is a very simple. Grab 25 of the name tag cards and set them up in a 5 x 5 grid. Then the spymasters take their respective agent cards to identify their teams colour. They also take 1 key card and put it into is base so that they can identify their codenames in the grid. They will both use the same setup on the same grid.

The colour on the outside of the key determines which team goes first. That team will receive the double agent card. The starting team has 1 extra codename to guess otherwise, going first; they can get an early lead.

The Spy master can then say 1 word, related to 1 or more cards in the grid and a number, which is how many cards the word relates to. They are not allowed to do anything else. No expressions, no gestures, nothing. They cannot even say “This is a bit of a stretch but my word is…” If their team selects a card that they had not actually linked to their clue they need to act like that was exactly what they wanted them to do.

The Spies need to find the codenames that the Spy masters have given clues for. They are allowed to discuss among themselves and then touch a card on the grid. If they selected a card of their teams colour it is covered by one of their team’s agent cards. If it is not their teams’ card then it is covered with the appropriate colour card. If they touched the assassin then they lose!

The Spies are allowed to make as many guess as the number the spy master has called out, plus 1. So if the spymaster has calls out, “Transportation, 3” then they can make up to 4 guesses. The extra guess can be a random guess or to try to get something that they missed in the previous turn. They can opt to pass and not use any or all of their chances.

The game ends when someone selects the assassin or when a team finds all of their codenames, that team is the winner!

I said it’s deceptively simple, and it really is. The concept is very easy. However once you are playing with a rival team you need to start linking multiple cards together and trying to get your team to only guess the correct cards while not giving away any clues to the opposing teams. This can be tricky. I once had 4 cards on the board with the names of places on them, 3 belonged to my team and the last was the assassin! Another time I needed someone to guess Bond and Agent, but if they selected Spy, which was the assassin, we would have lost.

It’s actually got a lot more depth than you can imagine at first glance. Teaching people the game is very easy and it does not take up too much space so you can play it anywhere. The codename cards are all double sided and the key cards can be turned in 4 different directions giving you an insane amount of replay value. Setup is quick as is packing away. It’s a really good party game.

The 2 and 3 player variants are interesting to play too. It’s like a quick brain teaser. There’s very little interaction between the spy masters and the spies, so that might not appeal to everyone. The quick play time means that everyone can have a turn being the spy master. It’s also light enough that you don’t mind playing multiple times in a row.

The variants for 2 & 3 player games are not bad either.

Can I play this at a braai?

With ease, in a relaxed environment with a lot of people around it will go down well. As long as you don’t take too long on your turns or take turns tending to the fire.

Thanks to Boardgames.co.za for the review copy of Codenames.