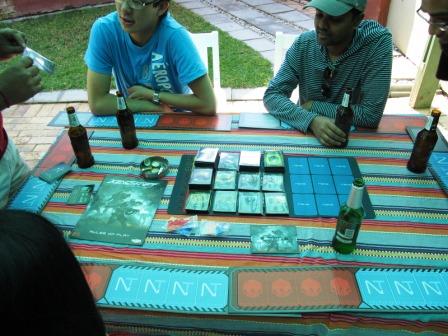 I’m part of a gaming group. We meet (almost) every Thursday and every 2-3 months we have a games day on a Saturday.  This Saturday was one of those Games days. As we sat around playing the newest game (Xenoshyft), I started thinking just how did it all start?  What’s is it like getting into gaming, and getting games, now in South Africa; compared to back in the day?

A long time ago, in an SA not too far away…

Back when I first started role playing it was still the late 80’s with the Steve Jackson and Ian Livingstons’ Fighting Fantasy system which I found in my local library.  Books where you could influence the story where something I took to very quickly. When I found the multi player RPG rules it was pure magic.

One of the guys was lucky enough to go for a holiday to the US and he brought back the ADnD 2nd edition rules and some miniatures!  We finally felt like we had the real deal.

One day a friend and I, we were still in high school, found ourselves in Adams & Griggs book store, in West Street,  looking for a study guide. On the shelf at the cashier we saw these little brown boxes with ‘Magic : the Gathering’ written on them. The logo looked familiar…

We skipped on the study guides.

From then on we never just played games when we had free time in class. We started organising braai’s for weekend gaming sessions.

One friend, who could not get his hands on cards soon enough, made photostat copies of our cards and got his younger sister to cut them out and stick them on cardboard!

Playing these games back then was not easy, even if you had the product at hand. There was a stigma around these types of games. Reports linking them to alcohol, drugs and other more sinister hogwash. Having parents who could separate fact from fiction helped.

I can honestly say that gaming actually help me in school. All those years playing DM meant that I could write essays and short stories off the cuff and my need for more ideas for my adventures meant that I was devouring books at the local library at a fantastic rate.

Fast forward to the 00’s

Eventually we grew up and went our separate ways and I found myself in JHB giving a friend a lift home one Sunday afternoon. She needed bread and we were passing Northcliff Corner so we stopped, and as we walked into the complex I was greeted by this logo….

I made it a point to go back to Esswex Hobbies the next weekend. I spent a little more than half a months salary and left with a 40K army of Black Templar Space Marines.

From then I started playing as often as I could.  Joining mailing groups and forums just to get further into the hobby. It was like a whole new world had opened up.

ICON & UPCON had become institutions,  I even took the family to events in Durban and CTN.

Eventually I met Paul Barfoot.  He worked halfway between my office and home, but lived quite a distance away and could not find time to game and paint. So we hatched a plan for me to pick him up on Tuesdays and we would paint and play or just relax then I would drop him off at home when we were done.

Over time we would have other players joining us when they could,  we even had painters coming through and giving lessons!

So games night was born.

Getting into board games

Paul moved to the UK (He is back now),while he was missed, there was a steady stream of gamers by now so the games continued. One day after playing at Wizards Books & Games,  I saw this on the shelf…

It reminded me of some long but epic games of RISK from the good old days. Feeling nostalgic, I bought it.

That changed things. It was a fantastic game. It got to the point that we were meeting to play 4 (sometimes 5) times a week and then having a post game run down over e-mail the next day. If we were going to be short players, friends invited other people over to join us.

We were able to finish full 5 player games in under 2 hours. Which is no mean feat. The circle of friends continued to grow, and our collection of games too. I estimate that we have over 70 games in our collection with more on the way.

The group has fractured a bit as life gets in the way of living. That just means that there are more places to play at, with new faces that I have not met yet. Just this week a friend that I have not seen I  months has started hosting games on a Saturday afternoon and invited me to join when I can.

That was a long story. These days you don’t have to torture yourself if you want to have a fevening few hours of fun with like minded people.

Good games are no longer only available at specialist stores. Boardgames SA has just launched a store locator,  so you can easily find a close retailer. Another local blog Table for Six has also compiled a handy list of retailers,  including online ones so you don’t even need to travel.  The games can come to you.

Relatively speaking it is still an expensive hobby, but review sites and gaming communities like the popular BBG makes it easy to find games that would suit your tastes and pocket. Alternatively there are many games days held each week or month where you can play with demo copies or even other people’s games.

Tuism has a list of events that happen in JHB. Don’t worry, stores in Durban (eg Batcave & Unseenshoppe ) and CTN (eg The Big Box , tablegaming.co.za – a good hub that links to clubs and an active FB page) are doing the same.

Did you know that South Africa has a National Board games day?

June 16 is not just Youth Day, it is also part of a drive to get people interacting socially.  As opposed to staring at a screen for hours on end. I for one am all for that. For me games night is more often than not a midweek escape from the rat race. Friendly faces, a nice challenge and some good laughs all in a safe environment, helps to keep me sane and entertained.

Gaming in SA is still very much a niche hobby,  but all the good ones are. Here’s to hoping that it keeps growing.

2 thoughts on “Getting started with Gaming in South Africa.”