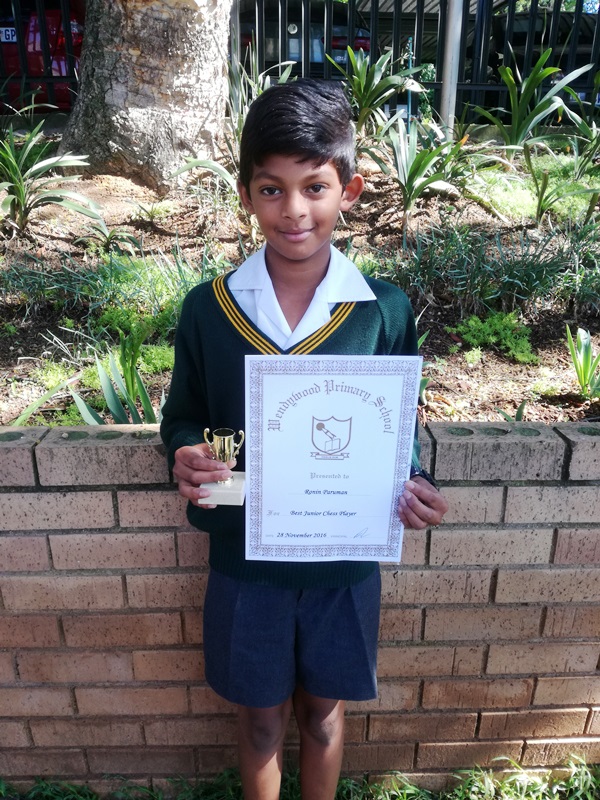 I don’t often boast about my kids. Well I try not to, those that hear me boasting might say otherwise 😉  This week my son received an award for the Best Junior Chess player in his school. I’m exceptionally proud. Samara plays too and she is certainly better than he is,  from what I gather she is the best of the seniors but that award is usually given to the Grade 7’s not the 6’s so she should get one year. The thing that I’m really excited about is not the achievement itself but the fact that Ronin did it even though he has ADD.

This is no easy feat. Getting him to concentrate on 1 thing for a prolonged period requires constant attention and effort on the part of someone else. When it comes to doing things at home that’s me. In School that’s the teachers. However, in a class of 30 kids he does not get the attention that he needs. If I had to attend to +30 kids all day I’d not be able to give all of them individual attention either. So I can’t really blame the teachers.

It’s usually video games and team sports that grabs him and holds him. We can be doing pretty much anything at home and if any of the kids in the area pop by with a ball, he is gone. (He plays cricket and rugby for the school too)

The fact that he can sit down and play chess has me very excited. Giddy almost. He can sit still for extended periods of time and focus on something that isn’t boisterous or, externally, very exciting. I just need to work harder at finding things that interest him so that he can develop his concentration skills. I have to admit that when it’s not his turn he does get a bit excitable 😉

Gaming has also helped me to focus

2016 has been a, overall, bad year for me. I’ve been diagnose Clinically Depressed (I think I have been for the past 2 years), I’ve been audited, I’ve had to have my car towed more times than I can care to remember… among a mountain of other things that has been going wrong this year.

Recently though, I’ve been focusing on my hobbies. The biggest one is painting. I’ve actually finished my Shadows of Brimstone core sets! The sense of achievement is immense. Just seeing the pieces come to life gives me a sense of accomplishment I’ve not felt in a long time and playing with fully painted models is something else entirely.

Now, don’t get me wrong. I’ve been working with people as a consultant in one form or another for around 20 years already. I know the impact intangible things can have on people and processes. I’ve been writing  code since I was 7 or so, virtual things can be “real” too. It’s just something else when it is personal. When  it is entirely in your mind and you are stuck there and you’re the only person who can actually get yourself out of whatever it is.

Truth be told I have been seeing cynical psychologist fro a few months and I have even changed jobs. Neither of these gives me as much personal satisfaction as actually doing something and seeing the physical fruits of my labor. The job change is AWESOME! The shrink not so much, he kept trying to get me to do things that was entirely impractical.  I’m not out of the woods yet, but lately I find myself waking up in the morning and actually wanting to get out of bed!

The kids have started showing interest in painting too.

It’s slow going as there’s always something happening at home that constantly interrupts us but we are making progress. Hopefully, this holiday, we will be able to get a few models done for each of them.

I’ve been meaning to make a chess set for Samara once I’ve got my painting skills up to par. I think it’s time to get cracking on that project, but maybe this time, make it for the both of them 😉